Shocking new revelation just came out when Rep. Trey Gowdy (R-SC) identified precisely who is responsible for the never-ending, nonsense Russia investigation that has been terrorizing the Trump administration for months.

According to a report from BizPacReview, Congressman Gowdy, appeared on Fox News this Tuesday where he revealed to his host and to the public that  Deputy Attorney General Rod Rosenstein is to blame for the wide extend of the investigation initiated and led by Special Counsel Robert Mueller.

Here how the interview went down:

MacCallum began the dialog by saying “You have seen special counsels in the past leave their purview and the investigation goes on for a long time, the next thing you know, you are investigating a Monica Lewinsky case when the president didn’t even know her when the special counsel began his work.” Then she asked Gowdy “You don’t have any fear of that here?”

The Congressman’s reply was that the investigation was already getting out of sense, however he did point out that he didn’t believe that Mueller was to take the blame for that, even though he was the FBI director from 2001 to 2013.

He said: “Do I have fear that jurisdiction may wander a bit? I think it already has.” adding, “It has already wandered a little bit. But I would not blame Bob Mueller.

Gowdy continued : “I would blame whoever drafted the jurisdiction and the charter that empowered him. If you look at it, it says matters that may arise from the investigation. What the heck heck does that mean? Is that a bank robbery in Topeka, Kansas?”

“And that language came from Rod Rosenstein?” asked MacCallum. To which he replied  “Yes ma’am.”

The interesting part is that during the interview, Gowdy also, didn’t clarify exactly, but he implied that Sydney Blumenthal was one of British spy Christopher Steele’s sources who provided Steele with information to comply the Trump dossier. Blumenthal is well-known as one of Clinton’s confidantes, who actually paid for the creation of the dossier. 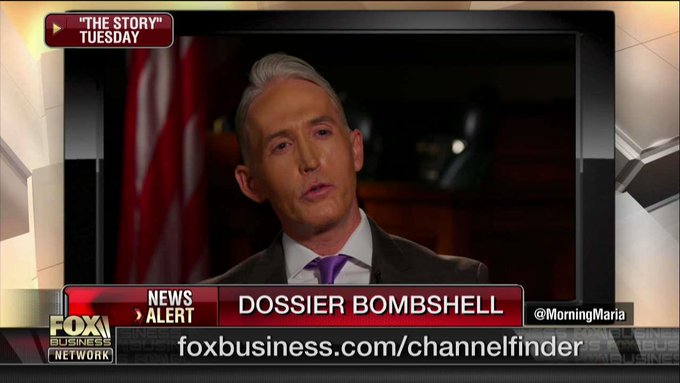 .@TGowdySC on dossier: “When you hear who… one of the sources of that information is, you’re going to think ‘oh my gosh I’ve heard that name somewhere before.'”

As reported from BizPacReview, Rosenstein was the one who appointed Mueller to the position of a special counsel in the Trump-Russia investigation which was supposed to look into alleged ties  between Russian agents and Trump’s presidential campaign.