Salt has gotten a really bad reputation in the past, and now there seems to be a lot of confusion about if salt is healthy or not.

It is important to note that the type of salt makes a big difference in whether it is healthy or not. Many of the studies about sodium intake were done with incomplete salts.

Man-made table salt is not the same as mineral-rich natural salt. Real salt has many important roles in the body and avoiding it can be problematic. As I said before:

Table salt, which is 97% Sodium Chloride (NaCl) is chemically produced, bleached and devoid of most other nutrients. It also contains Aluminum in many cases, which has been linked to Alzheimers disease and other problems in the body.

This type of salt is not naturally occurring and in fact, when salt-water fish are placed in salt water made with table salt… they die.

This type of salt is also devoid of the many trace minerals that the body needs… so it is a wise decision to avoid it.

If you have any of this type of table salt around your house, I’d recommend that you stop using it immediately. Don’t throw it out though… you can use it in natural cleaning and stain treatment. (Just don’t eat it!) 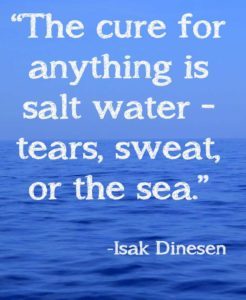 To the degree that table salt is bad, real salt is healthy, necessary and good.

While the research linking regular table salt to disease and health disorders is correct, we’ve thrown out the baby with the (salt) water.

Consider this: the body contains high concentrations of many minerals and nutrients, and while it needs water, it also must have the proper concentration of these nutrients in bones, blood and organs to function properly.

A person can’t be given an IV of plain water- it must contain a careful balance of minerals, including salt!”

Why Should You Eat More Salt?

Here are five reasons I personally make sure I consume enough healthy salt each day:

What Type of Salt?

The type of salt consumed is really important when talking about the health benefits. There is a tremendous difference between Himalayan salt which contains 93 additional trace minerals and regular table salt which is created in a lab and contains two.

I have a variety of healthy salts at our house and I use them in cooking, skin care and to make Sole. We use: