Tired of following the same hairstyle tutorial everyday? In an ideal world, we’d use a magic wand and come up with a new hairstyle whenever we wanted. But in the real world, we’re just a few teeny weeny efforts away from styling our hair differently every day of the month! Take a scroll through these 33 easy to make hairstyle tutorials we’ve compiled for you!

These contemporary hairstyle tutorials are designed to make life a lot easier! Our fashion statements shouldn’t take a great deal of effort but rather ease and should be enjoyable. These hairstyle tutorials vary from simple and casual to fancy and formal.

Take a thick strand of hair from the top right or left and french braid it down to the head. Take the remaining hair and and tie them into a loose, messy bun. Give the bun a little pull to add volume.

Make three or four regular/simple braids starting from the top side of the head, (alternate between both sides until they reach the center of the head). Then take a small fraction of hair from both sides and tie them loosely together. Take the braids and pin them up to their opposite sides. 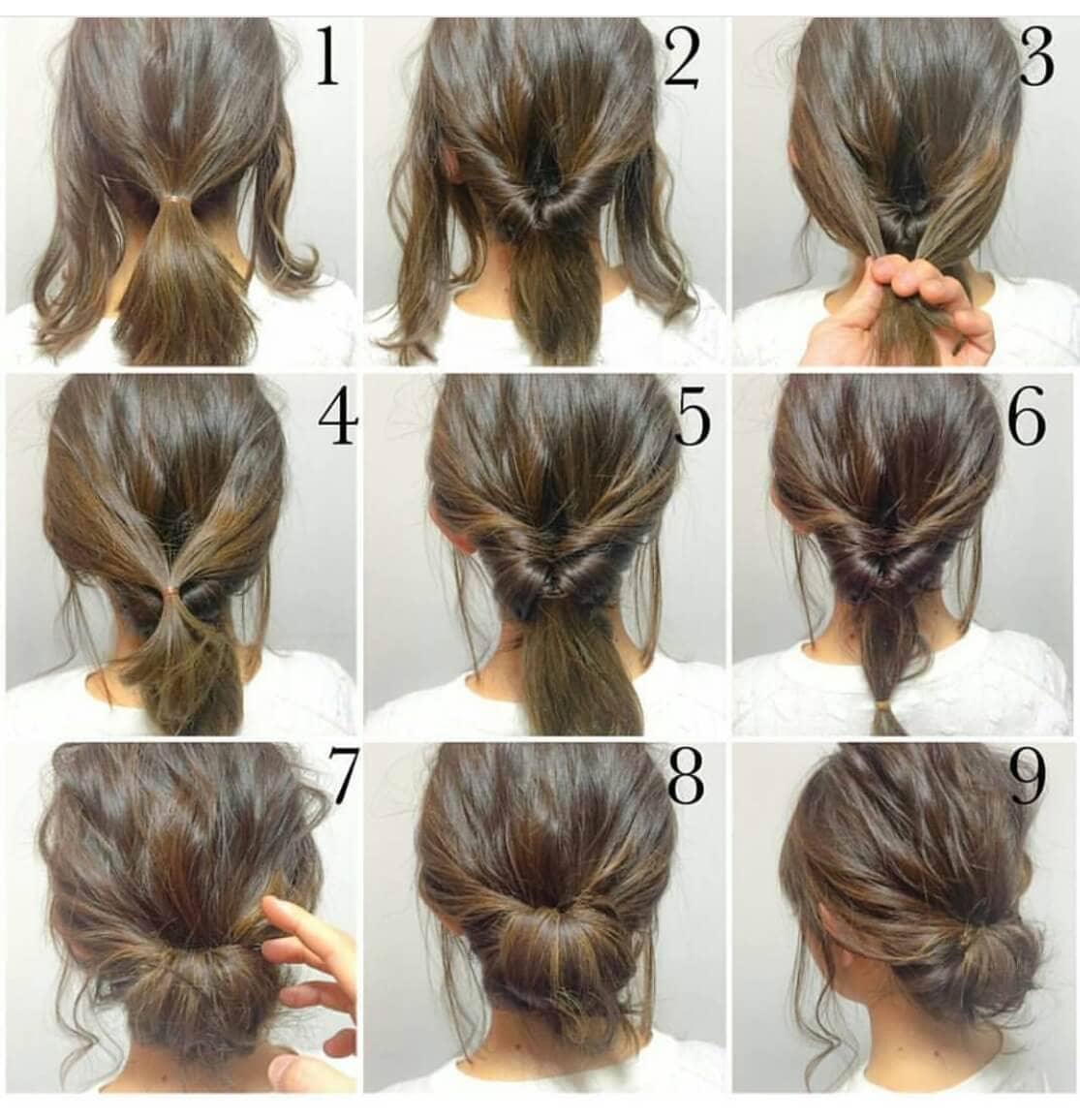 Draw a twisted parting on the left side of your head and braid the hair on that side halfway down. Take all the remaining hair and pull them to right side and twist them down to the ear lobe. Start braiding them from that point to align with the braid on the left side. Then, continue braiding both braids into one and let it fall onto your right side. 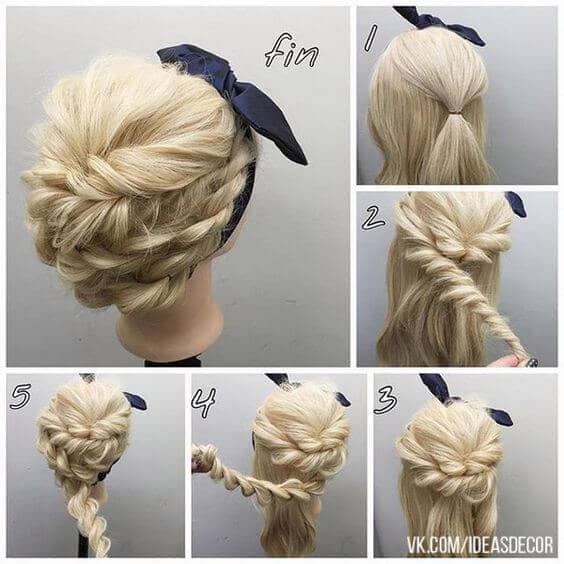 Take a strand of hair from the side of your head starting from the top, twist it and clip it to other side. Repeat the step, alternating between both sides, until you reach the bottom of the head.

Leave out some hair from the front. Draw a section on the top left side. French braid it all the way to ear. Tuck in the braid behind the rest of the hair using a pin. Curl the hair from the bottom.

Take hair from both sides and loosely tie them at the center. Then, tie them into another loop, but this time, don’t complete the loop. Split the bun into sections and use a pin to pin each loop to the strand of the hair behind it. Take a thin strand hair from the ponytail end and tie it around the center of the bow. 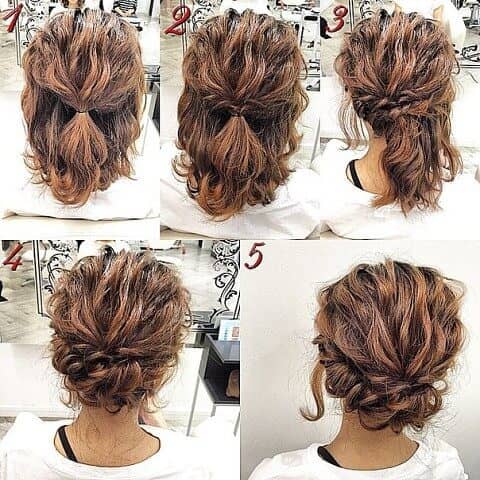 Tie your hair half way at the center. Take strands from the sides and from the bottom and pull them through and around the ponytail one at a time. Give your bun a little pull to add puffiness.

Make a bun or a pony using the front hair on top of the head. Then, make two small ponies, one on each side. Turn your head upside down and french braid your hair downside up. Open the bun and release the hair, then tie them all together. Open the other two ponies, and braid them downside up. Tie a bun with the remaining strands of the pony.

Tie a pony at the center using only the middle hair. Turn the pony inside out. Now from both sides, pull in a strand, and fold it around the tied up hair. Then, repeat the two steps as you go down. Keep repeating until the entire hair is braided.

Tie the entire hair into a ponytail. Make three braids separately. Then, use three braids as three partings for a normal braid. Roll up the braid.

Split hair into two sections on the top. French braid each section up to the crown part and twist the remaining hair. Roll them up into two tiny buns and pin them.

Tie a ponytail taking a section of hair from the top. Tie another pony tail right below in the same way, but also add the tail of the first pony. Keep repeating this step until all hair are tied up. Tuck in the last tail inwards and pin it.

Draw a middle parting and french braid hair from both sides of the head all the way to the bottom. Take a section of hair from the bottom of the head and make a braid separating it from the rest of the hair. Then, tie up all hair together leaving aside the bottom braid. Use that braid to wrap up the pony like a hair tie. 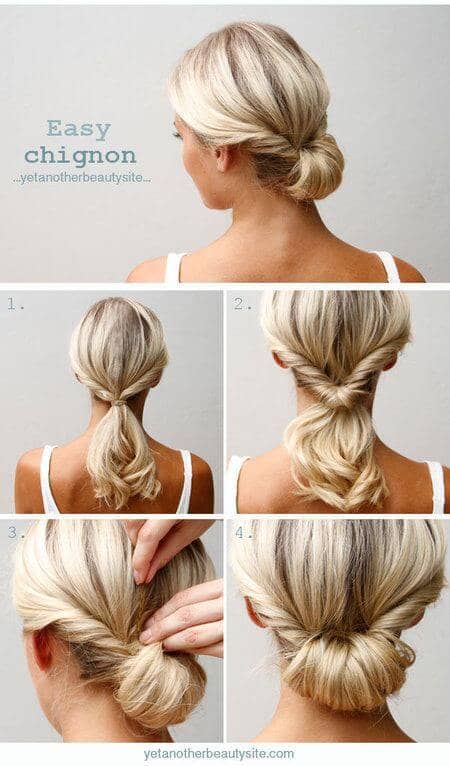 Split the front hair into two sections, each on one side. Take the back hair and tie them into a loose ponytail. Take the bottom part of the pony and pull it inside out (or through the ponytail). Next, take the two sections of the front hair and twist them. Pull them through the ponytail and repeat the same step for rest of the hair strands until all of them locked wrapped around the pony, into a nice puffy bun. 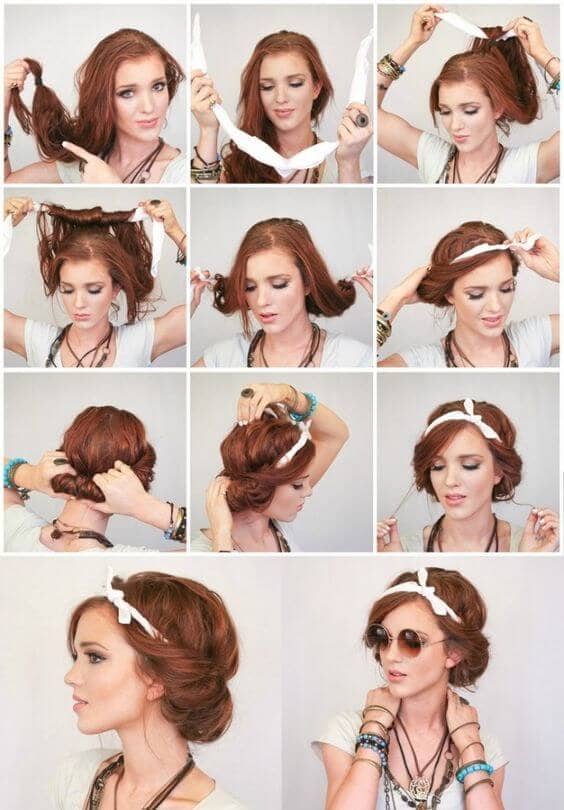 Take a bandanna and pull it under the hair. Roll in the tip of the hair and continue rolling all the way up, picking up more hair along the way. Tie the bandanna into a knot on top of the head. Pull on the rolled up hair gently to add volume and puffiness.

Take most of the hair into a ponytail and leave the hair at the bottom out. Make a high ponytail, then use the bottom hair and make another ponytail. 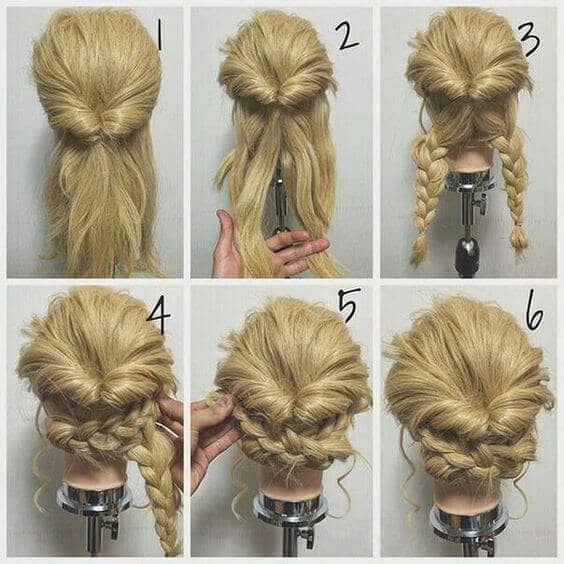 Tie the hair into small sections at the bottom. Then, tie the strands of these ponies into a french braid. Pin up the remaining hair braid to the other side of the head.

Make two normal braids starting from the left or right side of the head all the way down, leaving aside the back hair. Then, tuck the braids behind the rest of the hair and pin them up. Pull on the braids a little and bring the back hair onto the shoulder.

Splint the front hair into two, twist them and make a two strand braid on both sides. Tie them together at the back of the head and take the tail, pull it over once to make a knot, or just use pins to pin up each side.

Take a strand of hair from behind the ears and braid a thin braid on both sides. Then, take two strands from the front, one from each side and tie them at the back after twisting them. Take the two thin braids, and wrap each one around the tied up hair strand on its side.

Take a hair bun and pull your hair through it like a ponytail. Keep it up high. Then enclose the bun with a hairtie, leaving the long strands of hair out. Spread out the hair around the bun and take one thin strand of hair and wrap it around the bun.

Take a section of front hair and tie them at the back. Braid a fishbone braid on the tail. Pull on it to add volume and puffiness. 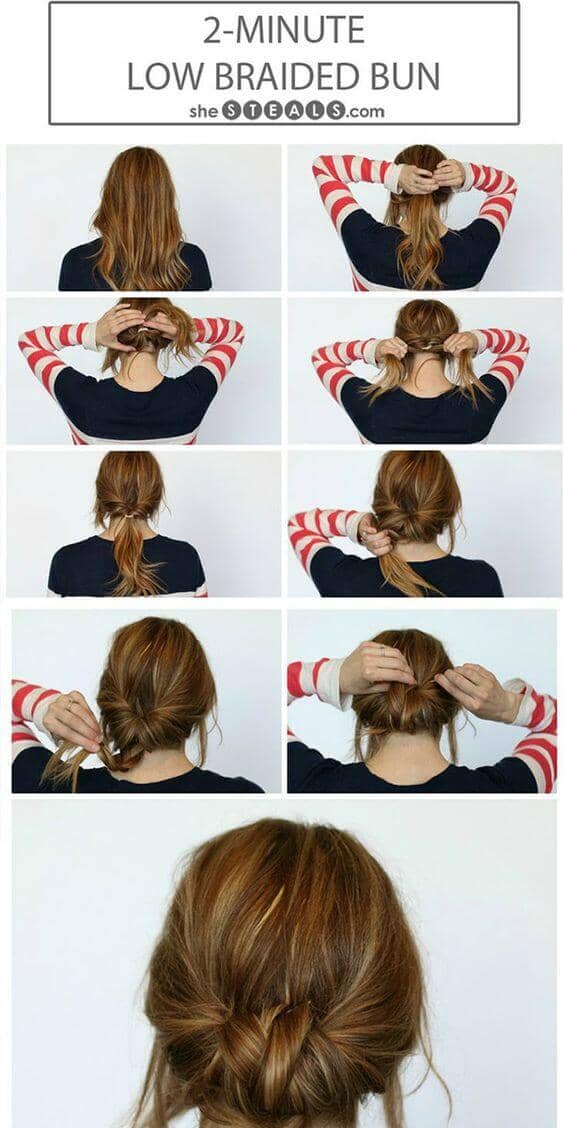 Make two ponytails splitting your hair into two. Take one pony and pull it through the tail of the other pony and tie on a hairtie. Repeat this step until the entire hair is braided. Then pull on the braid to add puffiness.

Take some hair from the top and tie them. Leave aside the front bangs or hair. Roll up the tail of the pony and make a messy bun. From the bottom right, pull out a section of hair and braid it.

Part the hair into two sections, using a left/right parting. French braid the side with the wider section down to the earlobe. Use the other side of the hair to braid a fishbone using the right side of the remaining hair.

Comb the hair thoroughly before starting. French braid your hair starting from any point and go round. Take the remaining hair braid and pin it up in a circular way. Pull on the braid to add volume.

Start from the left/right and make a french braid adding in hair from the other side to the back. Make sure the big loops forming are loose but can still hold the hair together. Continue this braid all the way to the bottom. Pull on it to add puffiness.

Turn the head upside down and comb the hair thoroughly. Start french braiding the hair downside up and stop at the crown top and make a bun with the remaining hair. 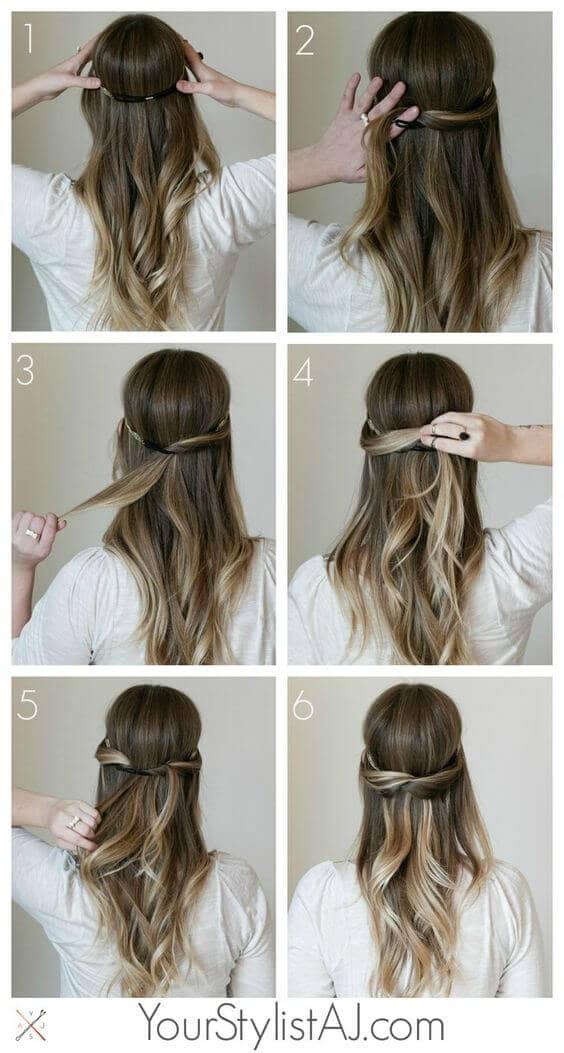 Take a headband and wear it at the center of the head. Take strands of hair and pull them over and around the band and spread them out. Take the last two strands and cross them.