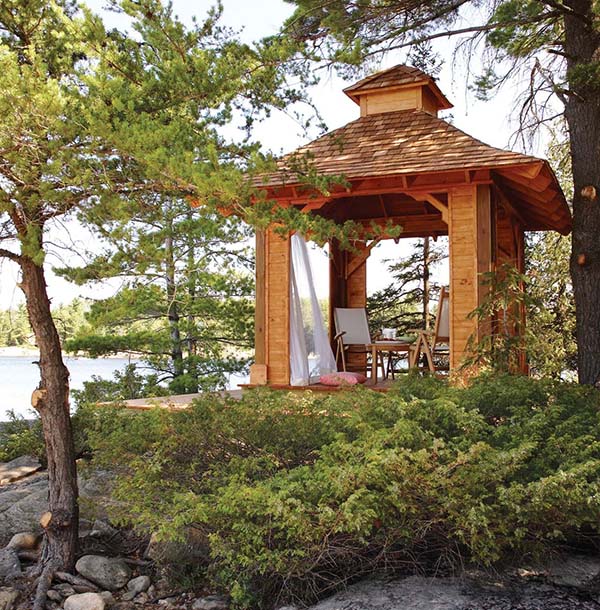 This gazebo looks like a scene out of paradise. It has a raised floor and an interesting roof line that catches your attention at first glance.

But once you step inside it has a great space for sitting, resting, or even sleeping. And to amp it up a notch, there is a cooler in the floor. What more could your heart desire in a gazebo? 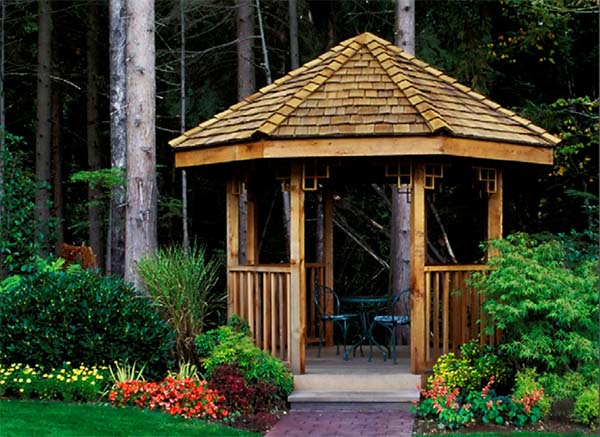 This gazebo is gorgeous. It has benches inside of it for you to sit on. And you can also do as the picture does and place a little table and chairs out there to enjoy as well.

But what I find the best about this gazebo is the plans. They are ‘mighty helpful’ (as their tagline implies.) They are easy to read and shouldn’t be very difficult for those that have carpentry skills. And even if you don’t, with the helpful tips you’ll hopefully find great success in this project.

3. Made In The Shade Gazebo 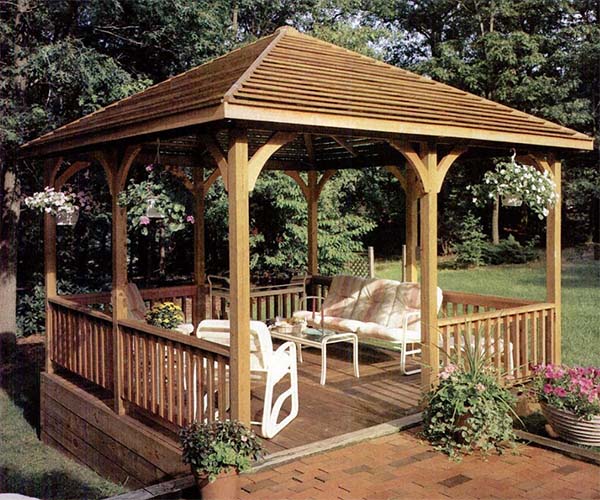 This gazebo is an awesome one. It is a larger one that has plenty of room for furniture for the ultimate outdoor living space.

So if you’d like a place to retire to at the end of a hard day, this appears to be it. And if you’d like a beautiful place to entertain or even just read this space has what you are looking for. It could practically be an outdoor living room if you desired. 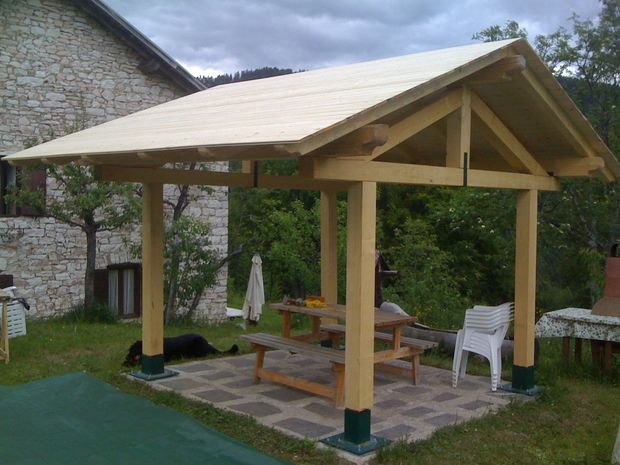 These plans are really cool. They show you how they created these plans with Google Sketch-Up. Then they took them and actually created the gazebo that they drew. This is a really neat option for those that are creative.

But the plans actually give you the gazebo they created. So even if you aren’t that creative, you have a plan you can follow. And hopefully it will be the gazebo of your dreams. 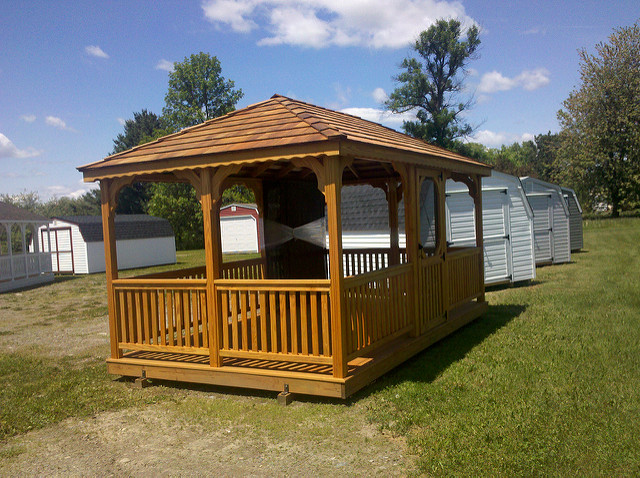 This gazebo was created by a man that wanted to build his wife her dream gazebo but knew he couldn’t afford the price of a prefab one. A lot of time prefab buildings go for $6,000 or more.

So instead of paying that high price he purchased the lumber and built it himself. He gave plenty of pictures to show you how to complete the build. This will make it much easier to complete this build. 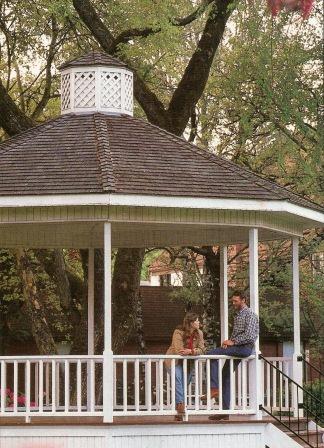 This gazebo looks like something you would see in a movie or use as a stage for a small town country group. It is absolutely gorgeous. And certainly a place you’d like to retire to at the end of a long day or use for a photo shoot.

So if you like the old southern style gazebo then you’ll love this one. It is a beautiful piece of art to add to your property. And also a great place to entertain. 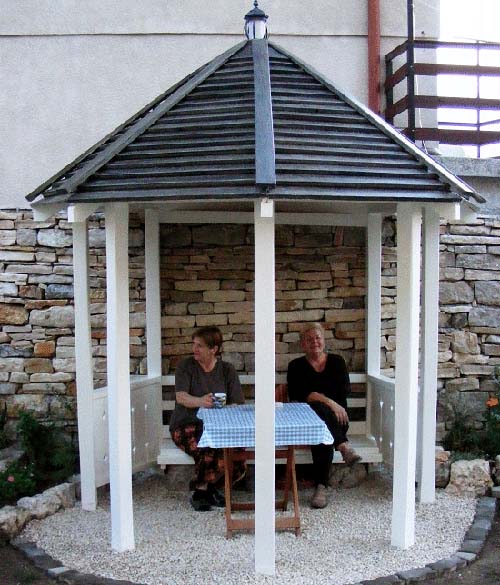 The octagon shape is probably the most common shape for a gazebo. These plans help you to easily accomplish building this traditional style gazebo.

So if you are looking for a traditional style gazebo then this should help you to get the look that you desire. And once you get it built, it would make a great picnic area or a place you could simply enjoy a hot cup of coffee. 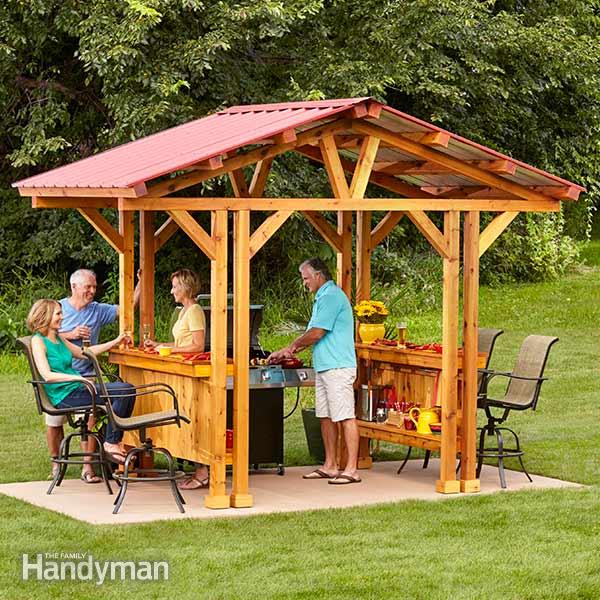 I love the look of this grillzebo. It is an awesome idea and something I’d like to see out in my own yard. You can use it for your grill or as a covered bar area.

So if you have a grill that you’d like to keep protected while also being open to entertainment then this is a great option for that. Even if you aren’t someone who likes to grill, if you entertain you could find a way to utilize this gazebo.

If you modified this gazebo into a lean-to style, you can also use wood stove instead of a grill. 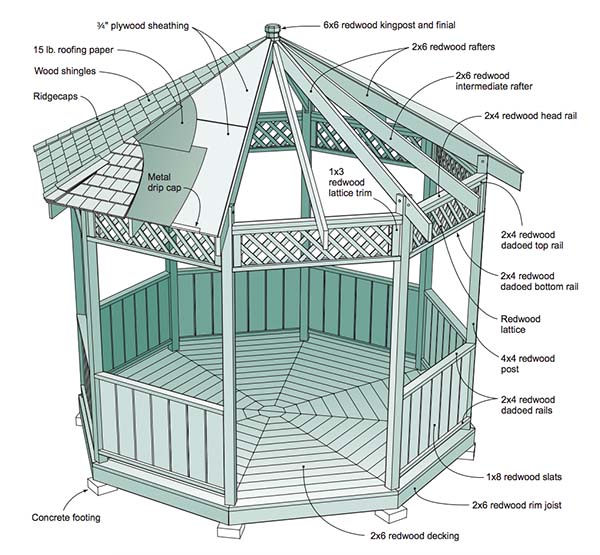 This gazebo is a very traditional style. It would be beautiful in any yard. And you could certainly enjoy it with friends or by yourself.

So if you prefer the traditional shape gazebo then you’ll love these plans. They should help you accomplish the look you love flawlessly.

This is another traditional style gazebo. The plans are very easy to read. And should make this an easier build for the carpenter who takes on the task.

So if you would love to have the traditional octagon style gazebo in your yard these plans might be the right fit for you. 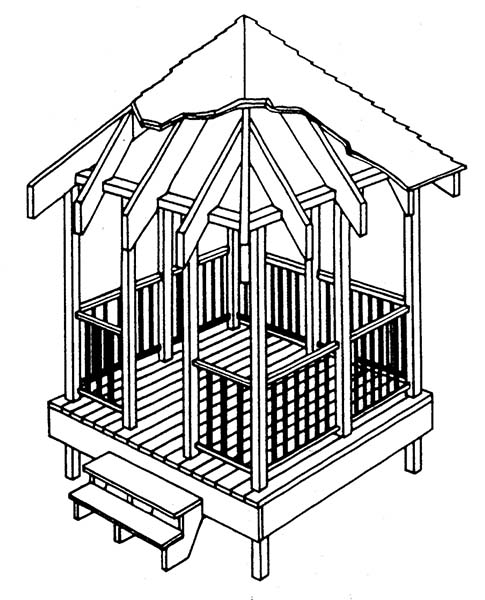 This gazebo has a mixture of traditional style with a touch of modern flare. Yet, it could still fit in with any modern setting or rustic setting too.

So if you like the idea of a smaller gazebo that has a slightly unique touch then you’ll love this one. The pointed roof and square shape also makes it a little easier to build as well.

12. Extreme How To Gazebo 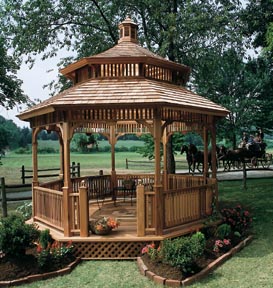 This gazebo is a beautiful masterpiece. It has a tiered ceiling where the sunlight can trickle in. And it also has lots of seating available too.

But what sets this gazebo over the top is the detailed plans that help you build it. So if you are looking for a beautiful place to relax then look no further. This gazebo could be your private oasis or a great place for family gathering. So let these plans help you to build this dream gazebo. 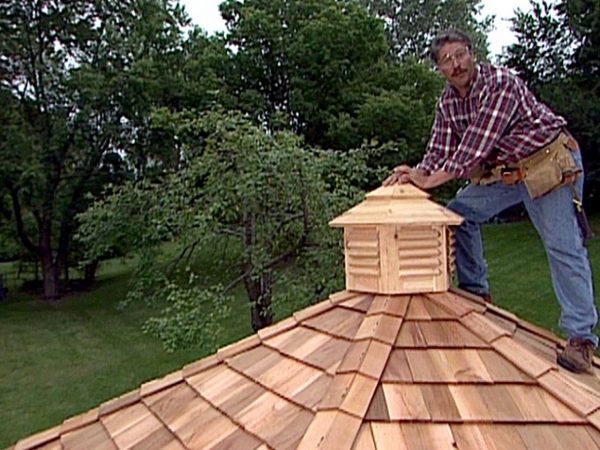 If you are a little nervous about cutting each piece of your gazebo then don’t fret. You are in luck. Gazebo kits are made so you can still build it yourself but don’t have to do so much measuring and cutting.

So this particular kit is viewed as being on the more expensive side. But it can be fully constructed in two days. If you are new to the world of carpentry then this might be a good idea. 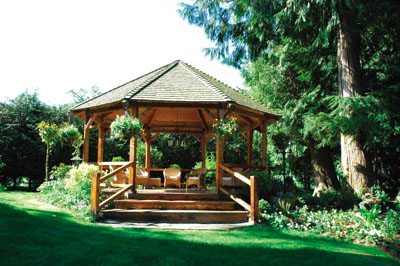 This article does a great job at not only telling you how to build this gazebo but also how great a gazebo actually is. It is a great outdoor space that can be used all year long. When it is cold just throw a heater out there.

But when it is warmer outside, the gazebo provides its own shade. So if you are looking for an outdoor area that you can get the maximum use out of consider this classic gazebo. The stairs give it a different and more dramatic entrance that is certainly a treat to your eyes. So build this beauty and enjoy it! 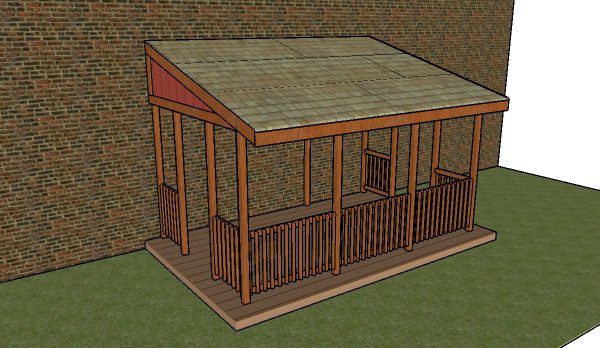 I really like this gazebo. It is very different from your traditional style gazebo. When you do something different like this, not only do you get the functionality of a gazebo. But you also get a unique addition to your property.

So if you live on a more rustic property you would probably really like this option. It also appears much easier to build than those with the rounded shape. So if you are new to carpentry then this might be a good option. 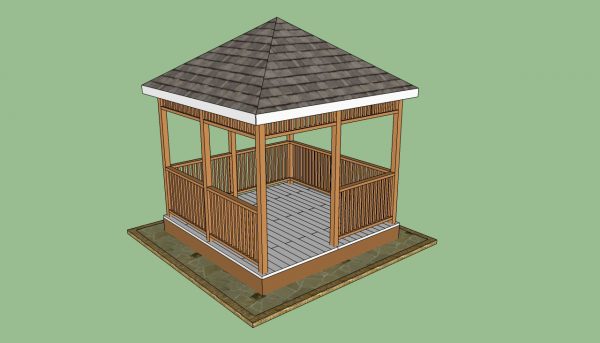 I really like this gazebo too. It isn’t the traditional octagon shape. But it is the square shape gazebo that is still common. Which gives you a slightly different option but won’t stand out as something extremely abstract on your property.

So if you want something that is still a little traditional then you’d probably find this gazebo interesting. I also like the plans for this gazebo as they are very easy to read. And the pictures are great too. 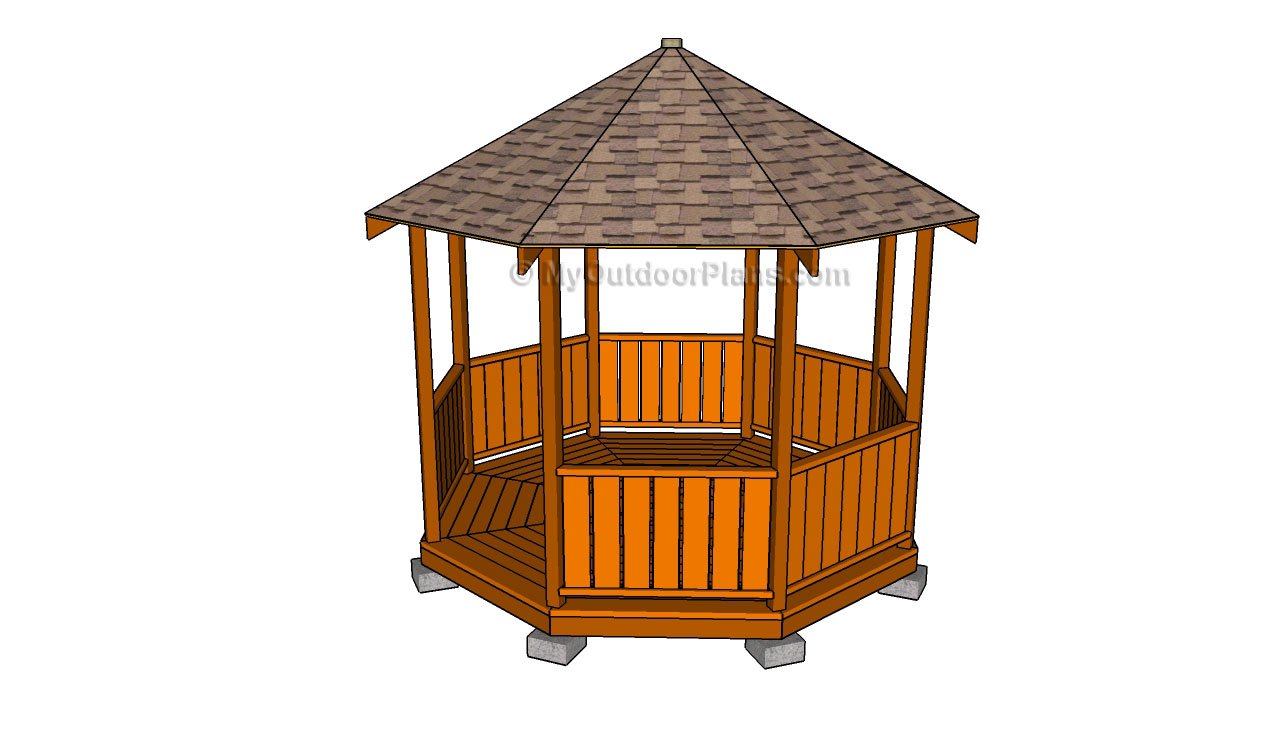 These plans are very detailed and make this project seem very attainable for someone with experience. If you are new to the scene of carpentry, you might attempt this. Just proceed with caution as this is a big undertaking. 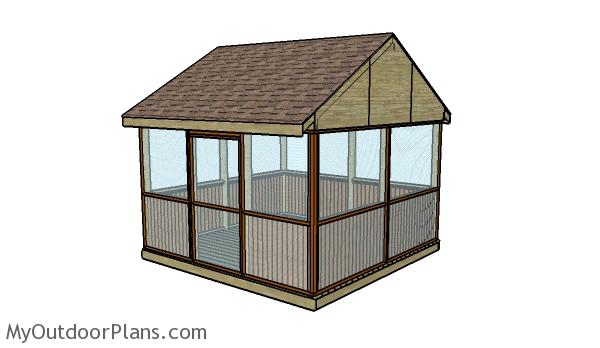 This looks heavenly! A screened porch of any kind is such a nice addition to a home. So naturally having a screened gazebo is so nice too. It allows for a cool breeze while not allowing pesky mosquitos to ruin your outdoor time.

And from a mother who has children that mosquitos love, this option is invaluable in those situations. The plans make it appear simple enough to build. And they offer great visuals as well. 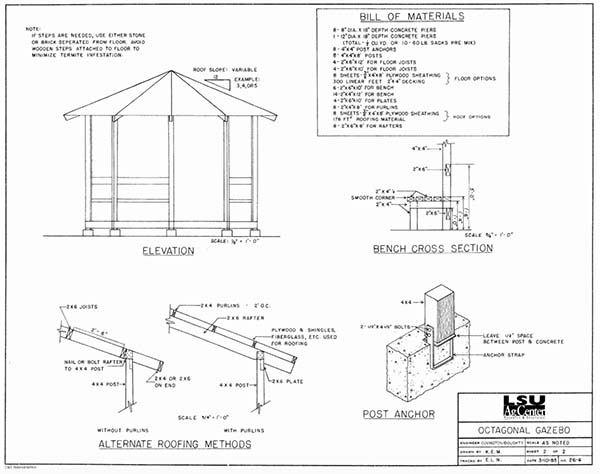 If you haven’t noticed, octagonal gazebos are the most common type. Well, this one is no different. It is an octagonal shape and certainly fits into the traditional category.

But that doesn’t mean that it won’t provide great amounts of shade during the warmer seasons. It can add a classic look to your property while giving you a great space to relax. 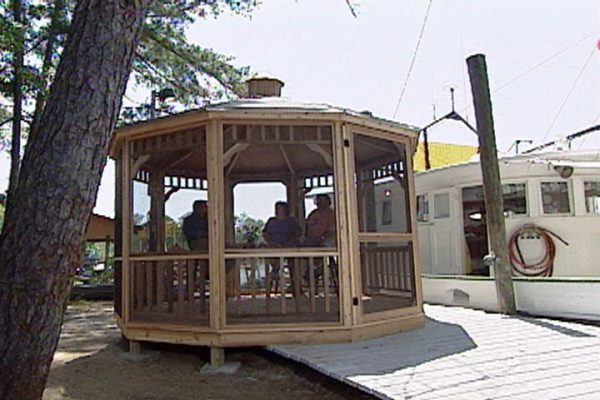 As I mentioned earlier, if you are a little nervous about building your own gazebo then a kit might be a good option. They are usually more expensive because a lot of the work is already done for you when it arrives.

However, you still have to put it together. And if you aren’t on a budget, having everything precut is a good idea for those unfamiliar with carpentry. Plus, it saves you a lot of time. So if you like the idea of a gazebo but are a little unsure about taking it on from scratch this kit will help you out drastically. 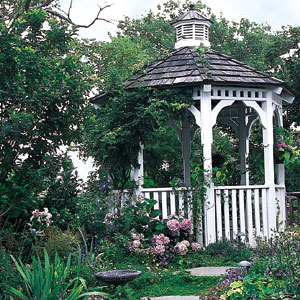 A lot of people will use gazebos as a place to display flowers and decorate their property. You can still add benches on the inside. But you are less likely to find outdoor tables or a whole outdoor living room set.

But they are still a great place to relax. However, your flowers can send it off the charts. And certainly help to make your home a piece of eye candy to onlookers. So if you want a personal masterpiece then build and create this beautiful floral gazebo.

These happen to be probably my favorite design of gazebo. I think the traditional styles are gorgeous to look at. But I like something that is a little different.

And this lean-to is different in comparison to other options. It is still a great place to relax, entertain, or showcase my flowers. And because of the shape, it should make for an easier build too.